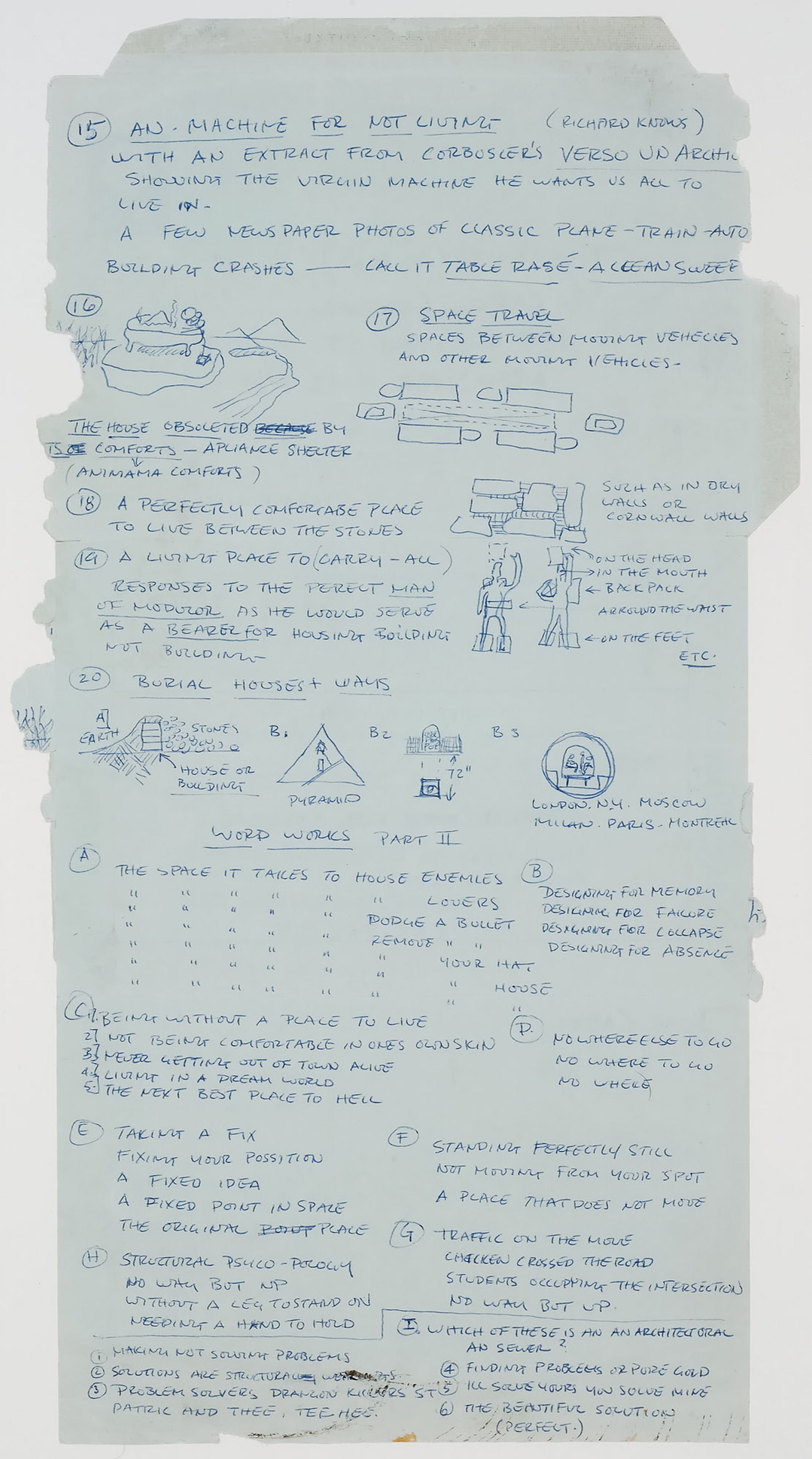 Notorious for dissecting abandoned buildings into sculptural environments, Gordon Matta-Clark (1943-1978) is widely understood as a “tool-belt conceptualist,” who once declared that he could not think within an idealized situation, but “would much sooner use a jackhammer.” Yet Matta-Clark’s interviews, written statements, and notes reveal him as a playful and insightful verbal thinker, whose puns, poetic fragments, and neologisms enact in language the same kinds of daring disruptions that he cut into built space. Marcel Duchamp (1887-1968) occupies a place in the art-historical imagination that is, in a sense, Matta-Clark’s exact opposite, as an artist who proclaimed the primacy of ideas and matière grise over the object. But, of course, Duchamp too was a celebrated master of puns, aphorisms, and sui generis nomenclature.

The seminar juxtaposes three pairs of invented terms—three by each artist—with which Matta-Clark and Duchamp defined their oppositions to traditional creative practices, named their appropriations of non-art objects, and explored their fascinations with subtle or inaccessible space. The coincidence of these terms—anartist and anarchitecture, readymade and ready-to-be-unmade, inframince and the thin edge—does not incontrovertibly prove a Duchampian influence in Matta-Clark’s oeuvre. Rather, it instantiates what Duchamp called a mirrorical return [renvoi miroirique], a repetition reversed and therefore altered.

Frances Richard is an art critic and poet. Her criticism appears in magazines such as Artforum, The Nation, and The London Review of Books, and in exhibition catalogues produced by institutions including the Guggenheim Museum and the Whitney Museum of American Art. In 2005, with Jeffrey Kastner and Sina Najafi, she organised an exhibition and accompanying monograph titled Odd Lots: Revisiting Gordon Matta-Clark’s “Fake Estates”; an extension of this project, now in progress, was awarded an Arts Writers Grant from Creative Capital/The Warhol Foundation. A volume of poems, See Through, was published by Four Way Books in 2003; a second book, Plummet, is forthcoming from Les Figues Press in 2011. Frances Richard has been a member of the editorial teams at Cabinet magazine and the literary journal Fence. She teaches at Barnard College and the Rhode Island School of Design.

Frances Richard was a Visiting Scholar at the CCA in 2010.