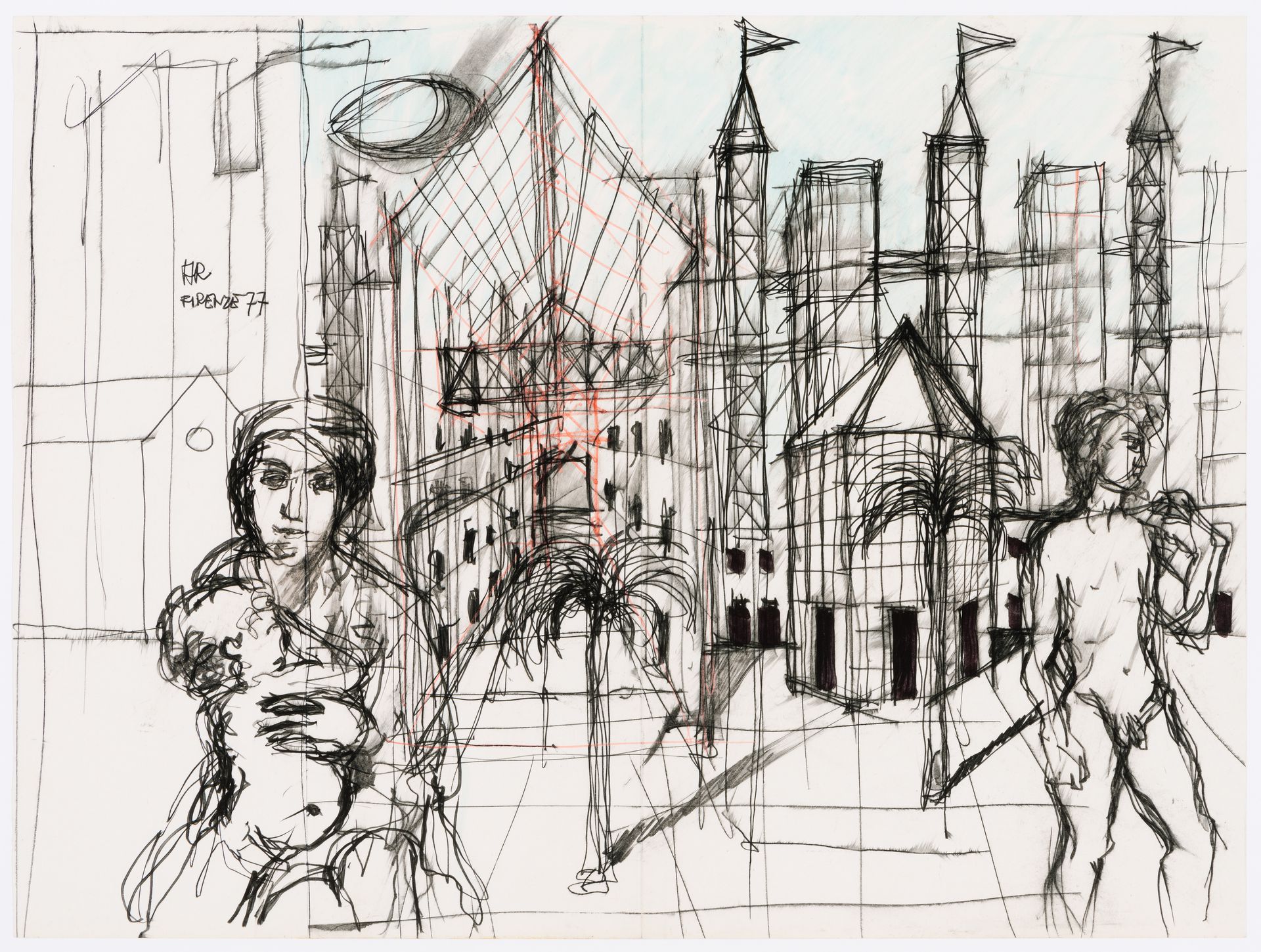 Aldo Rossi. Perspective Sketch for Centro Direzionale, Florence, with sketches of statues of David and of the Virgin and Child. 1977. DR1987:0172

Broadening our vision of cities to ‘world-space’ dimensions and keeping its theoretical implications in mind. My research seminar will unpack a working method whose main steps could lead the way to an urban philosophy:

To rely our understanding of cities on data, among which urban demography.

To situate cities : many of them, some the most important, are almost unknown to us ; to give meaning to this key geographical imperative (localization) ; to show how maps and plans reveal urban growth’s moving fronts and ‘invading waves’.

To select themes that can sustain the interpretation of the city-maps. Maps of cities in Asia, America or Europe elicit different readings. Just like cities, maps are constructed works: but how exactly? We must ask lest we should surrender to the confusing idea of the uniformization of the global urban landscape.

To renew concepts, at the risk of bracketing or neutralizing critical categories inherited from modern history. The urban lexicons and glossaries, which structure these concepts, are good indices of the cultural situation in and through which one measures urban mutations.

And finally to tackle the question of city forms, which is crucial for anyone considering cities from the point of view of architecture, if not urbanism. At the same time, to accept that nothing new can be conceived about cities without taking their ‘broaden space’ into consideration. For not only urban forms capture the identity of cities that a moment of their history made possible, but also they evolve with time to project a vision of what is possible which, in turn, determines the relationships of one city to all others.

Jean Attali, is agrégé de philosophie. He received a Ph.D . in philosophy from the Université Paris I and a M.Arch. from the University of East London. He is a professor at the Ecole nationale supérieure d’architecture Paris-Malaquais. He has collaborated to some projects with Rem Koolhaas, such as the 2000 exhibition Mutations. Jean Attali is the author of Le plan et le détail. Une philosophie de l’architecture et de la ville (Nîmes, J. Chambon, 2001). He is currently completing a new book entitled L’avant-pays. Essai sur la forme et l’horizon des villes (Presses Universitaires de Vincennes). He is also at work on a study on the figures of enunciation of architectural thought, from the works of Aldo Rossi, Peter Eisenman, Rem Koolhaas.

Jean Attali was a Visiting Scholar at the CCA in 2006.