Landscapes of Decentralisation: Hilberseimer, Caldwell, and the 'New Regional Pattern' 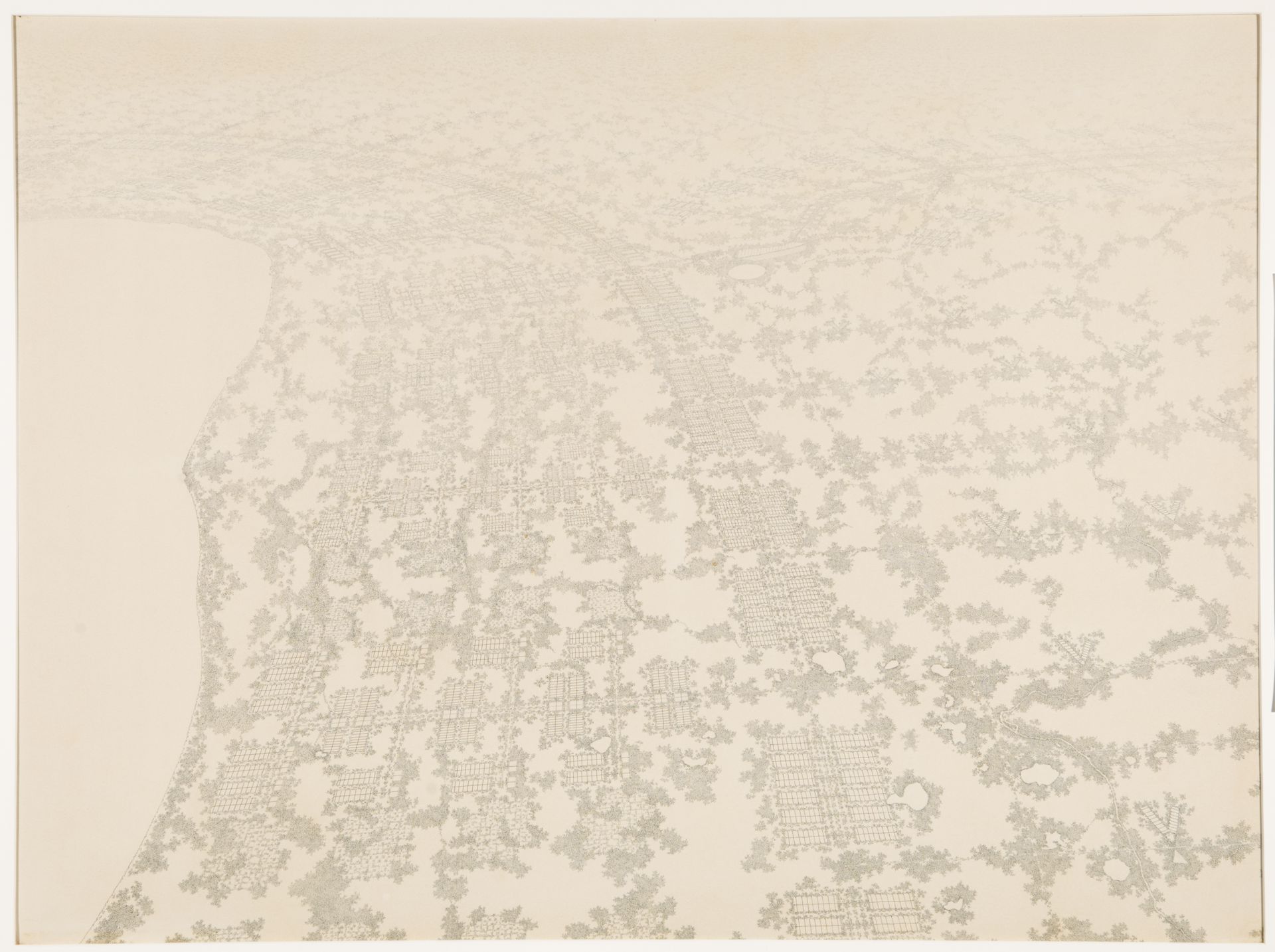 “With the rise of the automobile industry, Detroit’s population increased rapidly. But no plan was made to direct the city’s rapid growth. That growth proceeded in complete disorder… The structure of the city is wrong and cannot be improved merely by multiplying traffic facilities. Only a structural change of the city could bring about the necessary order.” (Hilberseimer, 1951; 171, 174.)

In 1955, four years after publishing this impassioned argument for structural change in Detroit, Ludwig Hilberseimer was commissioned to plan the urban “renewal” of a portion of that city’s deteriorating downtown. His plan fundamentally reconceived the urban pattern for what would come to be known as “Lafayette Park” through the integration of the automobile and its attendant infrastructure. The fullest evidence of Hilberseimer’s largely unbuilt urban theories, Lafayette Park continues to be regarded as one of Detroit’s most stable, diverse, and socially sustainable communities. Hilberseimer’s planning afforded a continuously viable and still vibrant mixed-income, mixed-race community of publicly subsidized housing in the midst of Detroit’s ongoing deterioration. Hilberseimer developed The New Regional Pattern as a larger regional strategy for the urbanization of a low-density North American urbanism based on the aggregation and arrangement of individual settlement units, of which Lafayette Park would become a single concrete example.

A uniquely talented interdisciplinary design team was assembled for the project by developer Herbert Greenwald, including Ludwig Mies van der Rohe, and landscape designer Alfred Caldwell. While Caldwell’s contributions to Hilberseimer’s built work at Lafayette Park are quite well documented, his precise intellectual contributions to Hilberseimer’s theoretical planning project for The New Regional Pattern are less clear. Beyond questions of simple attribution, the potentially more significant question is to what extent Hilberseimer adopted Caldwell’s interest in a regionally based landscape. As evident in Hilberseimer’s New Regional Pattern, Caldwell’s exquisite drawings illustrate an urbanism almost wholly reconceived, unburdened of the “weighty apparatus” of traditional urban form, in which landscape provides the medium of social and spatial order.

Charles Waldheim is Associate Dean of the Faculty of Architecture, Landscape, and Design at the University of Toronto. Waldheim’s teaching and research focus on contemporary urbanism and its relationship to landscape. This work has recently focused on the relation of landscape to North American industrial economy, particularly the ongoing decentralization of urban form in the second half of the twentieth century. He coined the term “landscape urbanism” to describe the emergence of the landscape medium in the context of post-industrial urbanism. On this topic he is editor of The Landscape Urbanism Reader (Princeton Architectural Press, 2006); and CASE: Lafayette Park Detroit (Prestel / Harvard Design School, 2004). Waldheim is co-editor, with Katerina Ruedi Ray, of Chicago Architecture: Histories, Revisions, Alternatives (Chicago: University of Chicago Press, 2005). Waldheim is also author of Constructed Ground (University of Illinois Press, 2001), and co-editor, with Jason Young and Georgia Daskalakis, of Stalking Detroit (Barcelona: ACTAR, 2001). Waldheim has also been named Fellow of the Institute for Urban Design; is an Honorary Member of the Ontario Association of Landscape Architects (OALA); and serves on the editorial board of Canadian Architect. Waldheim is a licensed architect and maintains a consulting practice, Urban Agency, advising on a range of issues at the intersection of design and contemporary urbanism.

Charles Waldheim was a Visiting Scholar at the CCA in 2006.