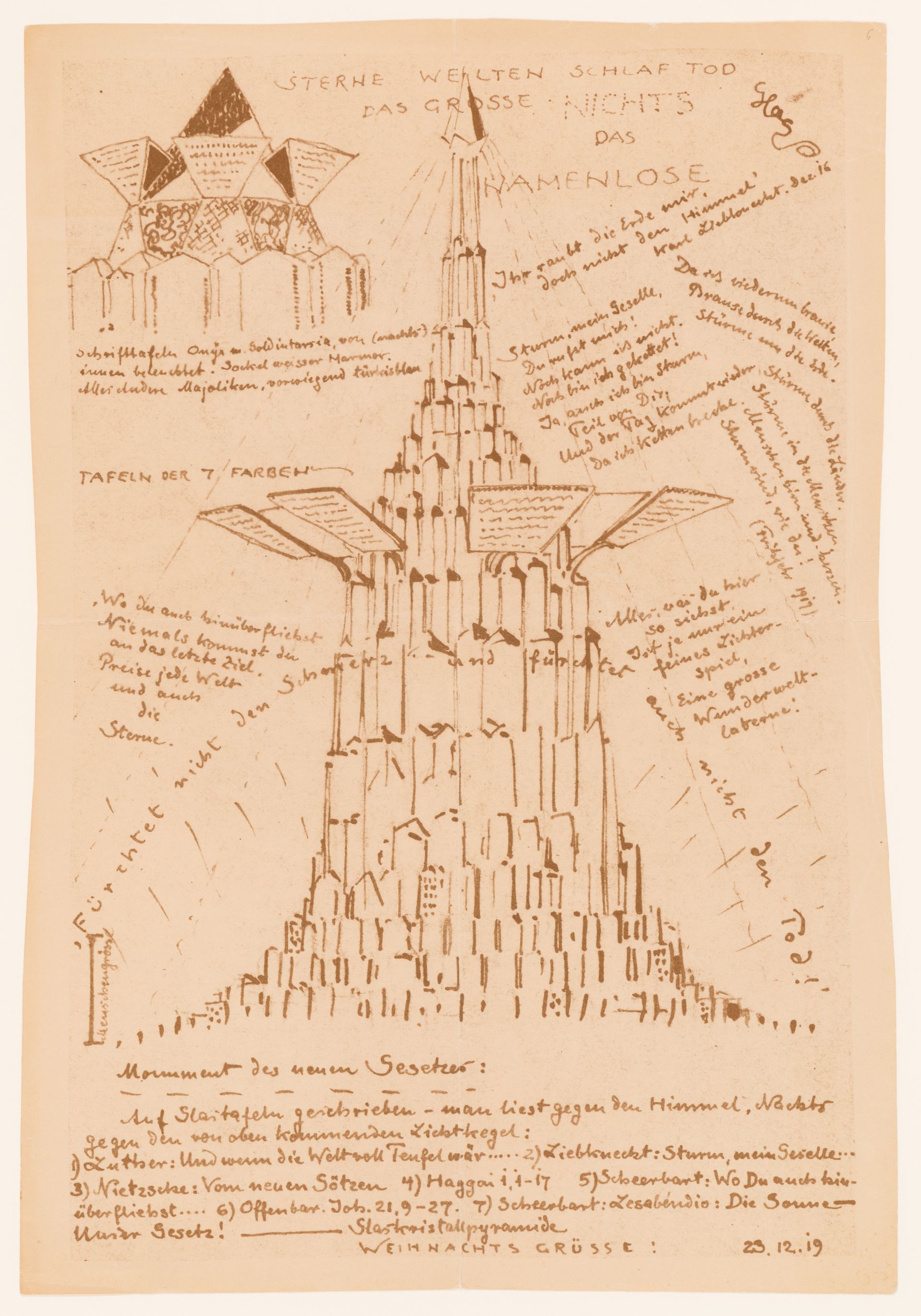 The celestial cenacle of Great Men described by Cicero in ‘Scipion’s Dream’ (De Re Publica) was conformed to the ideal of a veritable Glory, escaping the Roman crowd`s assessment as much as any mortal’s temporality. With revolutionary neo-Classicism and Romantism, the Salute’s secularization brought down to earth the spatial and temporal difference that was inherent to the idea of cenacle. From then on, this gathering was generally made of ‘hommes d’esprit’ (Geistige) and artists who were not contemporaneous to their contemporaries. Always lying beyond the present time and often aiming towards the future, the artists – elevated at the rank of Genius - were detached from the ‘space of appearances’ where the political action of men was playing out [Hannah Arendt] to oppose to the tensions and the dislocation of historical reality their own becoming understood as the model to be followed by the future People.

The Gläserne Kette represents a potent moment in this configuration that underscores our modernity. Gläserne Kette, ‘Glass Chain,’ thus designates both the actors and the work of a thirteen-member group of artists and architects who lived apart in different German cities and who, starting in December 1919, exchanged letters copied thirteen times over in which writing overlap with utopian drawings in an inextricable manner. ‘Mystical Body,’ either because it was asserting at the same time the presence and the anticipation of the City of God, or because it was presented as a glorious collective Body and as its Sign, the Gläserne Kette leads to a series of questions for historical investigation.

The Expressionists pushed to its limits the fichtean subjectivism, adding to it the ‘Illusion’ that had already casted its dark shadow over Schopenhauer, Nietzsche, or Wagner who considered reality as a natura naturata (incorporating facts and historical events, capitalism and Marxism, social democratie and parlementary democratie without any distinction). In this seminar, I unpack the conceptual mechanism of this shift by a examining closely the Gläserne Kette members’ operations and translations on their texts and drawings in a period in which the law of gravity had no bearing on the space-time of Utopia. A large part of this correspondence lies in the Oswald Matthias Ungers archive at the CCA.

Maria Stavrinaki is Assistant Professor of history of contemporary art at the University of Paris-I-Panthéon-Sorbonne. After having completed her doctoral dissertation on the ideologies of the expressionist total art work (Paris-I University, 2000) and with the support of different fellowships [Hellenic Foundation of Grants, Fondation Thyssen, Deutscher Akademischer Austauschdienst (DAAD), Centre interdisciplinaire d’études et de recherches sur l’Allemagne (CIERA), etc.], she is now working on the historical avant-gard movements. More specifically, her research centers upon the relationships between art, architecture, politics and religion in the 1910s and 1920s. She was the editor of the French edition of Adolf Behne’s Moderne Zweckbau and is preparing the French edition of Franz Marc’s Writings. While in residence at the CCA, she is finishing the revised and augmented edition of the Gläserne Kette (Editions de la Villette, Paris). Les recherches qu’elle mène au CCA devraient aboutir à une édition révisée et augmentée de la Gläserne Kette (Editions de la Villette, Paris).

Maria Stavrinaki was a Visiting Scholar at the CCA in 2005.