Robert Burley: The Disappearance of Darkness

The exhibition Robert Burley: The Disappearance of Darkness presents a series of photographs by Canadian artist Robert Burley, documenting the decline of traditional photographic equipment manufacturing brought on by new technologies. Since 2005, digital photographic technology has increasingly displaced its analog predecessor, resulting in a plummeting demand for conventional photographic products and the disappearance of factories that manufactured them. Factories belonging to multinational firms such as Kodak, Agfa, and Polaroid, which until recently produced cameras, photographic paper, film, and darkroom chemicals on a global scale, have been abandoned and demolished one after another. The emergence of digital photographic technology has upheaved every occupation related to the industry, provoked changed in the built environment, and transformed photographic practice and culture. This digital revolution, while initially technological and economic in character, and essentially concerned with the production, dissemination and preservation of images, has also affected on our perception of images and of their temporality.

Inspired by the significance of this turning point in the history of the photographic medium, Robert Burley has created the series The Disappearance of Darkness. As Burley explains: “The goal of my work is to explore the places where the alchemy of the photographic process was practised on a massive scale over the last century. The essential feature of these factories was, ironically, darkness: manufacturing took place in the absence of light—a characteristic that has defined the photographic process since it was first invented in 1839. The act of photographing is often associated with a desire to record something on the verge of change or disappearance. In this case, my subject is the medium itself.” This purpose is apparent in the six works from The Disappearance of Darkness presented in the CCA’s Hall cases. 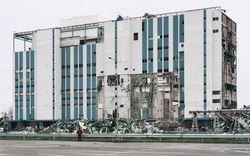