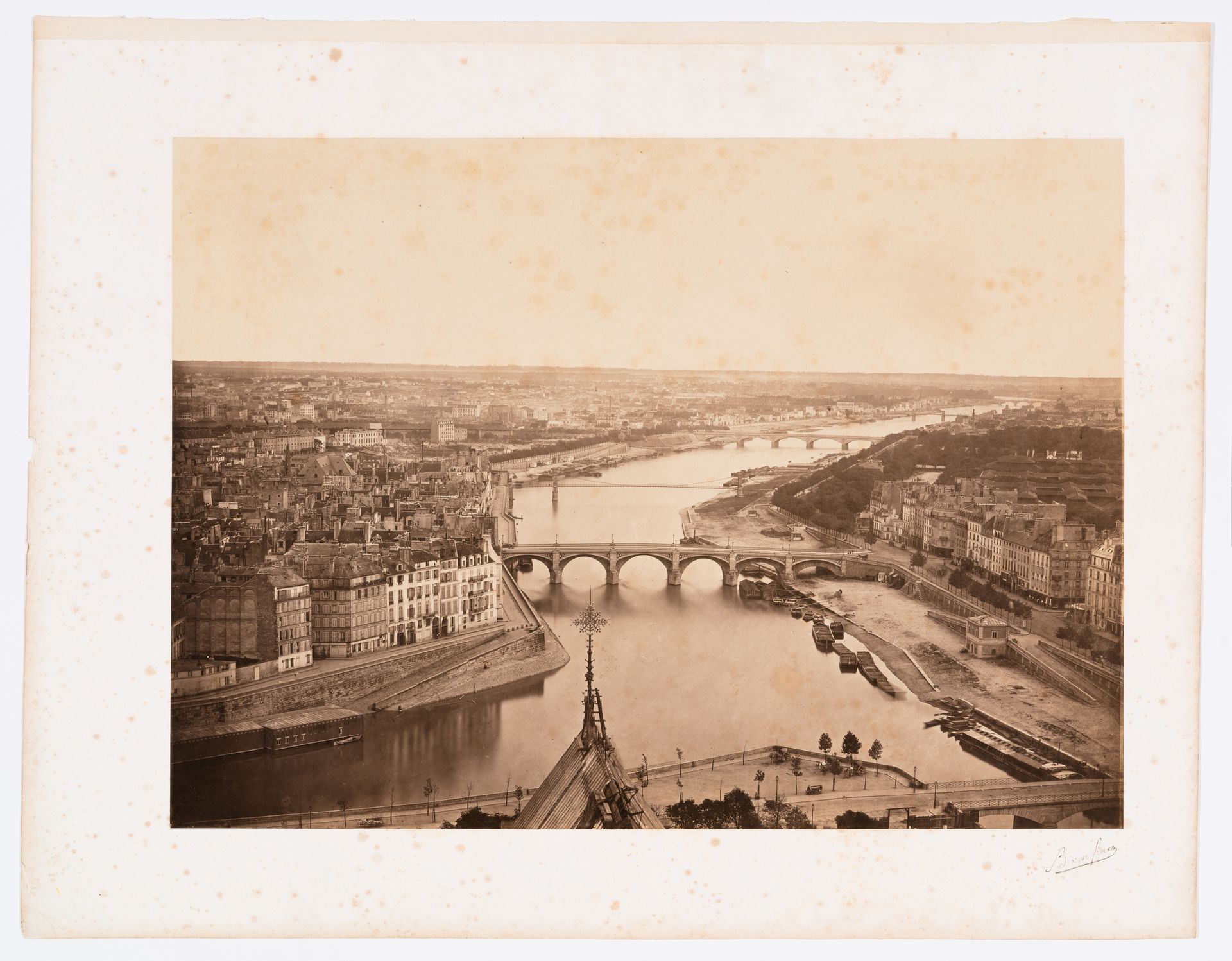 This photograph of the view to the east of Notre-Dame probably was taken from the scaffolding erected during the building of Viollet-le Duc’s spire in 1856 to 1859. Various signs of construction and repair are visible along the peak of the roof, and far below is the walled plaza complete with newly planted trees that Viollet-le Duc added at the back of the cathedral. The Bissons deposited this picture at the Bibliothèque Nationale under the title Panorama de Bercy in 1857, along with a similar view to the west called Panorama de Paris. The area of Bercy received its name from the large complex of wine warehouses, called the Entrepôt de Bercy, which is visible at the upper left.

Louis-Auguste and Auguste-Rosalie Bisson were active in the arts before their venture into photography. The elder brother was an architect, employed by their native city of Paris, while the younger worked with their father, a heraldic painter. Soon after Daguerre’s announcement of his invention in 1839, the family established the photographic firm Bisson Père et Fils. Their earlier works resulted from commissions for daguerreotypes of specimens of natural history, works of art, and portraits.

In the early 1850s, the Bissons changed to glass negatives and albumen prints, a more commercially advantageous process since it permitted the replication of any given image. They continued to exhibit their prints regularly through the 1850s and early 1860s, winning awards for the excellence of their work. In 1855 the brothers won a first-class medal at the Exposition universelle de Paris, and in 1857 published their work in the Journal of the Photographic Society of London. Their most ambitious project appeared in instalments between 1853 and 1862: Reproductions photographiques des plus remarquables de l’Antiquité, du Moyen-âge et de la Renaissance, a complete copy of which is in the Bibliothèque nationale in Paris. A compilation of large albumen prints of works from all over Europe, the portfolio reflects the period’s passion for the recording and study of great monuments of the past, from the remains of the Roman Empire to the cathedral of Notre-Dame.

To learn more about the work of Bisson Frères and other photographers in our collection, consult our search tool or our guide to the photography collection.