Disneyland, with its far-flung colonies in Florida, Japan, and France, is a key symbol of contemporary American culture that has been both celebrated and attacked as the ultimate embodiment of consumer society, of simulation and pastiche, of the blurring of distinctions between reality and mass-media imagery. The Architecture of Reassurance: Designing the Disney Theme Parks looks behind the multiple myths of Disneyland, charting the evolution of the parks through a process of becoming in which the “magic” of Disney moves closer to the real world.

The Architecture of Reassurance follows the layout of the parks themselves—from berm, to Main Street, and from hub to “lands”: Frontierland and Adventureland, playing on the relationship between humankind, myth, and nature; Fantasyland, with its imagery from the movies; and Tomorrowland, with its once optimistic visions of the future becoming sinister, playful and ironic. Some 350 objects selected from the archives of Walt Disney Imagineering are presented, including plans, drawings, paintings, and models for the parks and their attractions.

The exhibition is the fourth in the series The American Century, which seeks to cast a fresh eye on critical aspects of modern America’s architectural culture – its promises and disappointments, its roots and offshoots, its unparalleled worldwide impact. 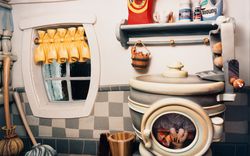 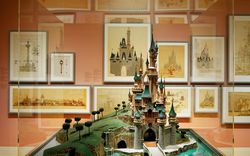 Touring The Architecture of Reassur­ance
Return to Past
1
1