What does it mean to live in the city without a place you can call your own? What role can architects have in addressing homelessness? And how can cities become better homes for all? The documentary film What It Takes to Make a Home follows a conversation between architects Michael Maltzan (Los Angeles) and Alexander Hagner (Vienna), who have been grappling with these questions over many years and through various projects. While the cities and the political and economic contexts in which Maltzan and Hagner work differ, both search for long-term strategies for housing instead of reacting with ad hoc solutions. Focussing on some causes and conditions of homelessness, the film questions the role architects can play toward overcoming the stigmatization of people experiencing it, in order to build more inclusive cities.

What It Takes to Make a Home is the first of the three-part documentary series produced by the CCA. This series examines the ways in which changing societies, new economic pressures, and increasing population density are affecting the homes of various communities. Through the lens of architectural projects in different socio-political contexts, each episode looks at the global scope as well as the local specificities of a particular issue. While the first episode examines how architects are confronting the pressing issue of homelessness in Los Angeles and Vienna, the second and third parts of this series deal with other challenges to urban society created by changes in lifestyles and demographics that affect the spatial configuration of our environments: the increase of families consisting of one single person, and our growing aging society.

This film received the generous support of a private donor.

The film premiered in fall 2019 at the Architecture and Design Film Festival in New York City, Vancouver, and Toronto, has been presented as part of the 58th Session of the Commission for Social Development at the United Nations headquarters in New York City, and has been travelling festivals worldwide since. 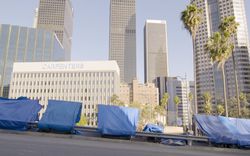 Screening and conversation: What It Takes to Make a Home

Screening and conversation:What It Takes to Make a Home

Other films in the series