(–)
The planet is the client
Technology sometimes falls short
What you can do with the city
Let us assure you
Figuring Territory
Of Migration
A Social Reset
With and Within
Will Happiness Find Us?
What about the provinces?
A history of references
Into the material world
Take care
Nature reorganized
Ideas of living
The Other Architect
Origins of the digital
The rest of your senses
Journeys and translation
What the future looked like

From Commod­ity to Com­munity?
Published: December 2016 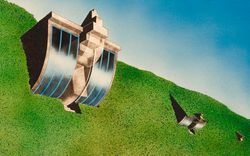 Using the Earth for Shelter
Published: 21 May 2020

Print article
Technology sometimes falls short
What you can do with the city
Let us assure you
Figuring Territory
Of Migration
A Social Reset
With and Within
Will Happiness Find Us?
What about the provinces?
A history of references
Into the material world
Take care
Nature reorganized
Ideas of living
The Other Architect
Origins of the digital
The rest of your senses
Journeys and translation
What the future looked like

The planet is the client

This issue is a reader for a particular, activist blend of architectural approaches to the environment. It establishes a bit of (tendentious) context; it defines, and redefines, and argues over certain terms, clarifying the attitudes behind them; it documents our mistakes as evenly as our successes, so we can really understand where we’ve been and where we are now. And since we’re still hoping, it puts forward new design possibilities—which we promise don’t all originate in the 1970s. Your help on that would be greatly appreciated.

From Commodity to Community?

Using the Earth for Shelter

How to Make Seed Bombs

Does your toilet flush? How much water does it use? Where does your waste go? Rethinking the infrastructuring of the domestic was a priority for ecological designers in the 1970s. Even the seemingly banal technology of the toilet was closely scrutinized for its environmental, economic, social, and political implications. The modern flush toilet, linked to an industrial sewage treatment system, had become the convenient, conventional option in the developed world. However, the problems of its capital-intensive production and infrastructure, its excessive use of resources (particularly water), and the environmental impact of waste-water outflows were also becoming apparent.

In July 1973, the Minimum Cost Housing Group (MCHG) in the School of Architecture at McGill University published Stop the Five Gallon Flush!. The report was part of the “The Problem Is” series, which documented the MCHG’s research into improved housing production for low-income families. Stop the Five Gallon Flush! recognized the shortcomings of the flush toilet (its cover noted “70% of the human race does not have piped water”) and explored alternative waste disposal systems. The reports in the series were sold by the MCHG via mail order.

This pamphleteering was largely borne out of the emphasis on efficiency and self-reliance instilled by the MCHG’s director, the architect Alvaro Ortega, who had been involved with many United Nations low-cost-housing projects in Asia, Africa, and South America beginning in the 1950s. In this spirit, the MCHG did everything in the publishing process themselves. The archive in the CCA holds original photos, typeset text, pasted up camera-ready proofs and even the aluminium printing plates for a range of “The Problem Is” publications.

The approach behind Stop the Five Gallon Flush! also owed something to the methods of the countercultural media flourishing in North America at the time, particularly on the West Coast, which made the most of new, cheaper, and more accessible print technologies. Production values were usually low, and publications often used typewriter fonts and hand-drawn illustrations collaged together and printed on inexpensive paper. Through these efforts, a vibrant print culture emerged around the distribution of material about self-sufficiency, ecology, alternative education, crafts, organic gardening, alternative energy, and other topics related to holistic lifestyle practices.

Stop the Five Gallon Flush! bridged the worlds of international development research, the appropriate technology movement, countercultural lifestyle publishing, and ecological design. Such was its success that the initial edition quickly sold out. Thirteen hundred copies had been sold by 1975, when a revised and expanded edition was printed (the MCHG archive at the CCA holds a copy of this reprint). Stop the Five Gallon Flush! would go on to sell around six thousand copies purely via mail order, and it heralded a wave of pamphlets and books that advocated alternative sanitation systems. These included the Rodale organization’s Goodbye to the Flush Toilet (1977), the Swedish International Development Authority’s Sanitation Without Water (1978), and Sim Van der Ryn’s “classic” The Toilet Papers (1978).